Roland Blaser takes well-earned retirement at 70 – any earlier would have been too early for all of us!

Roland Blaser takes well-earned retirement at 70 – any earlier would have been too early for all of us! 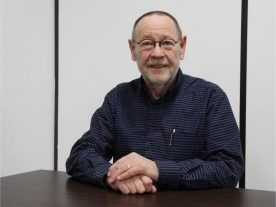 He has had an involvement with bottle closures for more than half of his working life!

Roland Blaser has been dealing with the manufacture of bottle closure systems for many years and then at IMD he moved over to relevant test systems. He started his professional career as a mechanical engineer at Oberburg Engineering. He was firstly Technical Manager there, then took on responsibility for commissioning systems and training which meant he was deployed abroad. Later, he took over the order control department where he was a buyer. It was part of the cooperation between Oberburg Engineering and IMD that meant he got to know Matthias Hermle and IMD products better. A stroke of luck, as transpired at a later date.

At 62 years of age, Roland Blaser had to reorientate himself, because Oberburg Engineering was taken over by Packsys Global and the Purchasing department in Oberburg was closed. A job advertisement by IMD sparked his interest – but he did not dare submit an application, as IMD were looking for a “younger” employee. Matthias Hermle, CEO of IMD, however saw things quite differently and brought Roland Blaser, along with his extensive experience, to IMD. He became Head of Qualification at IMD on 1 November 2009.

Roland was also affectionately known as “Vättu”, which means something like “Papa”

Lots of young, innovative people full of new ideas work at IMD. The young developers and Roland Blaser both inspired and accepted each other. Roland Blaser always proved to be a good listener who took matters seriously. Thanks to his experience and natural calm, he was involved in many innovations at IMD. They were only too pleased to go get “Vättu” to cast an eye over new developments and give his opinion on them. But Roland Blaser was also able to learn a lot from them, especially when it came to new techniques. It was definitely a case of “give and take”.

Roland Blaser is now looking forward to a new chapter in his life, without a fixed schedule. He simply wants to do whatever he and his wife, Trudi, fancy doing. They want to travel the world, indulge in the hobby of model-making, spend plenty of time with their grandchildren and be part of their lives.

“We wish Roland Blaser nothing but the best and would like to thank him for the valuable time we have spent together.”